GPLA Tale of the Deep Spawner

”In the Sopranos pilot episode, Tony explained to Dr Melfi that he missed getting in on something (the mob) at the ground floor, that he “came in too late for that”, and that he realizes now he came in at the “end”:

Remember that for a moment – we’ll come back to it.

Without getting all philosophilosicalacious on you, here in Southern California, our contemporary western culture seems, to many, as if it is being yanked in different directions.  Pulled apart at times, what-have-you.  Societal friction, economic pressures, political disagreements.  All that rancid mess.

But for those of us in the Deep Spawners, we get a break from all that…”stuff”.  For a while, every so often, we get to ”pause” all the sharp shrapnel swirling around us and step aside.  Like a Jet Li fight scene, we get to stop action, and move around all the flying bullets and broken glass frozen in air, and go have a seat.  Relax a bit. Let our mind wander to different things.  Rest our muscles a minute and catch our breath.  We get a mental break, before having to dive back into the fight.

Aug 18th, we had one of our “pauses” at our own GPLA event we hosted at Barcito (hyperlink: https://www.barcitola.com/).  Approximately 30 Duelists (along with other guests in the wings) went head-to-head, drank, ate from the buffet, all in a terrific atmosphere in the heart of downtown.

I ran an odd Erhamgeddon-ish (GWub) pile because I was jones-ing for a fix of Spirit Link — Force of Nature action: 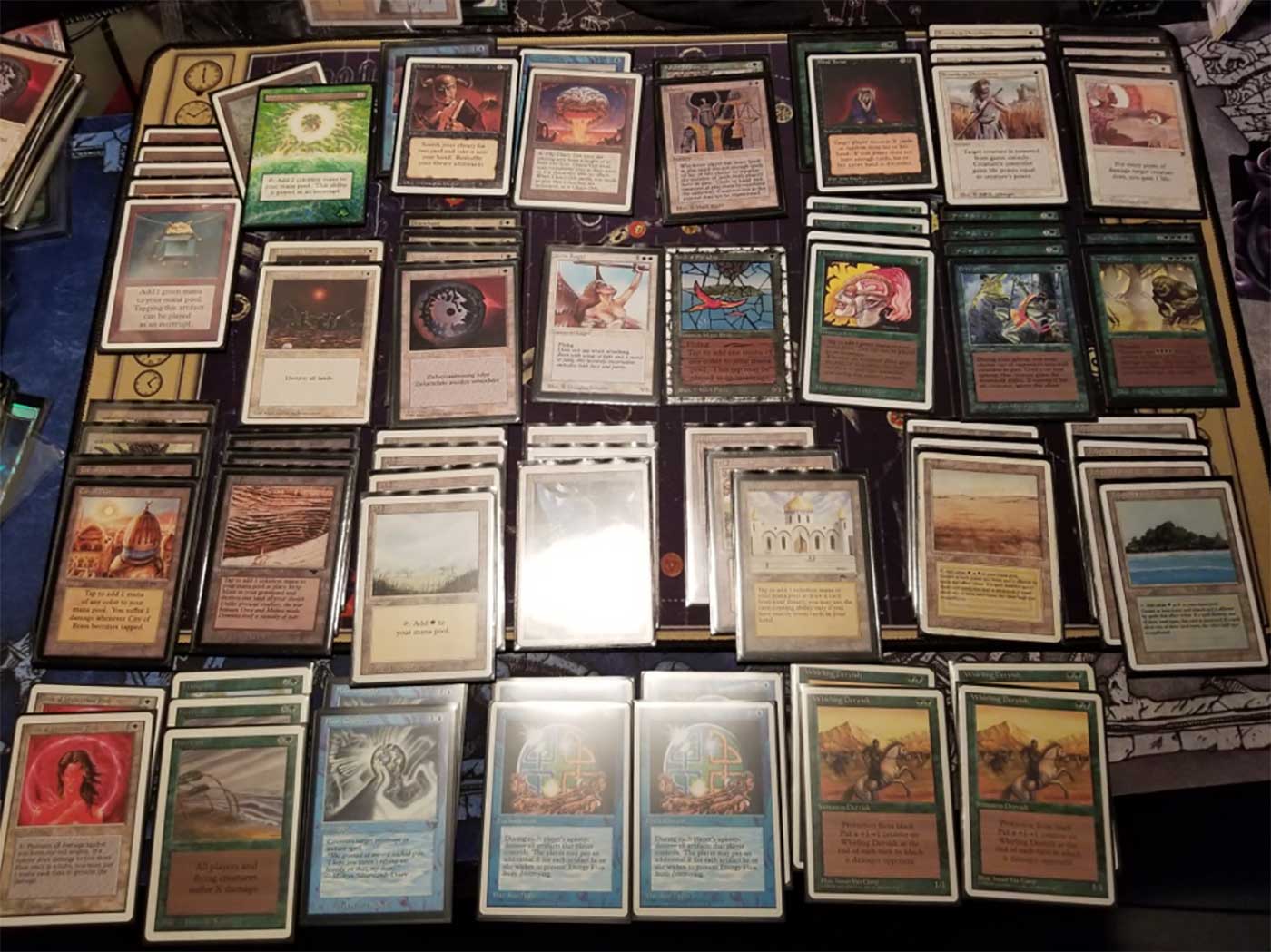 I ended the night in 4th place

but, what may be more entertaining or interesting

is where I started…

I first tapped mana sometime back in 1994.

I was a newlywed idiot, and we were living in married housing attending a Louisiana university.  I was studying secondary education, thinking I would teach high school Art and English for a living (Ha!).  One day in Baton Rouge, I took my (now) ex-wife to a book store my friends and I used to frequent when I played DnD and painted miniatures back when I was a kid – Elliot’s Book Store — now known as Little Wars.  While browsing around, there were a group of teens frantically opening packs and “jazzed” about  some card game.  They even played, standing up, on a little 18” round table, designed for book displays.  It was the only space around to play.

I asked the cashier what “Magic the Gathering “ was and he described it as “some silly card game these guys are addicted to”.  Then he showed me the packs he had next to the register and explained he had to limit them to buying 2 packs a day.  We then giggled about “limiting teens to 2 packs a day” and I ended up buying a Vampire the Masquerade RPG rulebook.  Wrong choice, huh?

Which I did…My grades that fall semester sucked.  Bad.  Thanks, Richard.

Between then and Aug 18th, 2018 a whole bunch of malarkey happened.  Mainly, we moved to Los Angeles and I sold all my collection in 1996 to a little comic book store in Whittier named “I’m Comics”  (pssssst – anyone with any information regarding the owner of I’m Comics, please let me know – I am trying in vain to hunt down my original Lotus, which was pretty distinctive, and the trail ends with him).  We moved back to Louisiana.  Hurricane Katrina.  Relocated back to Los Angeles.  Divorced.  Raised 3 kids.

Probably a few times over.  With only one or two people remotely interested in playing those old decks I used to love playing.  So, I was forced to play standard and modern crap, just to get games in.  The formats were, well….at times “OK”.  But the crowd of punks you always ended up playing against, man those little dudes suck.

And WoTC….I’ll save those thoughts for later.

But now, my oldest son and I enjoy MTG 93/94 Old School.  By odd circumstances, we ended up connecting with the Deep Spawners, who I had only heard about, but could never connect with.  Chris’s handle “Elusiv” is pretty spot on – trying to track these dudes down was like trying to catch Bruce napping in his Batcave.

As a father, getting to enjoy this hobby with your son is amazing.

My greatest wish for all of you Old Schoolers is that one day you get to do the same, if not already.  Its one of those rare things in life where there just aren’t enough words to describe it.

Fast-forward to our event, my lazy red-neck recollection of my matches went as follows:

We went far into both decks, before I was able to get 2x Flux on the board and gain momentum.  We finally went to time in the round and at the end of turn 5, I wasn’t able to hit him for the last few points of life he had.

So, we go to Orb flips for the tie-breaker, and after about 9 flips, he finally missed on a corner/edge bounce, giving me the match, and ending the night 4-1.

Looking around, talking to everyone, watching other matches, I was extremely fortunate.  Many of the decks that showed up, being run by some of the smartest, most experienced players around would have smoked me if we matched up against each other.  I could have very easily had a 2-3 night instead.

But driving home, my son chatting up a storm about  all the fun he had, and cards he wants to collect, and decks he would like to try…that was probably the best part of the night.  I am very, very fortunate.

I may have missed fully getting in the game at the ground floor, and the game itself, with all the junk surrounding newer formats, maybe its nearing the “end” as Tony puts it…But not for me.  Not now.  Not at my house.  Sometimes, every so often….the timing’s right, and life’s good.