From Middle School to Old School Magic The Gathering

Where did it all start with Old School Magic? It was the start of a new middle school year in 1994, I was 13 years old and in 8th grade.  Prior to finding Magic I had been collecting baseball cards for years and was also into comics and other random collector cards (I still have a full set of X-Men cards from the time), so I was familiar with visiting the local comic/card shop.  The summer of 1994 I had dabbled in D&D with a group of friends and one of them had an older brother who introduced us to magic.

So by the time the school year started we were all starting our collections and playing magic everyday at lunch time and after school, just sitting in a shady area playing magic in the grass.  Our backpacks always had our school books and our magic cards so we can play and trade everyday.  At one point the school ended up even banning the cards as there were complaints of theft.

For me the game was awesome!

I not only got to play this game everyday after school but I got to search and collect cards I needed for the awful decks (still suck at making decks) I would come up with.  I remember riding my bike around to all the local card shops, bookstores, and comic book stores looking for the revised edition cards which were already scarce to find at MSRP prices (Fallen Empires were always super easy to find).

Finding “The Dark” for like $5 a pack back then was super exciting because I finally got to buy a pack of the older sets.

At this time the old school magic power cards and older sets were already getting very expensive, especially for a kid with just a allowance.  I do remember NM Unlimited Black Lotus being sold for like $150 at the card shop back then and thinking who could ever afford that.

By the end of that 94/95 school year Magic was already banned from the middle school and the group seemed to have moved on to other things. 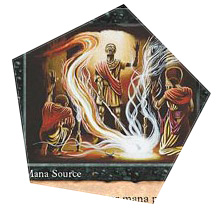 I tried a few years later getting back into magic around the time Mirage came out but it wasn’t the same for me.

So my MTG Old School cards got packed into boxes and stored in closets and garages for the next 20+ years.

Roughly six or so years ago:

I would pull out the cards every so often, look at my old deck and trade binder and reminiscence about playing magic again.  I had heard about magic online and thought it would be fun to buy some pauper style decks and play online with people.  After the excitement of buying/collecting new cards and making new decks wore off and I played a few games online, I quickly got bored and gave up on magic online.

Fast Forward to around May this year:

I pulled out the cards again and knew the 8 or 9 dual lands were probably still worth something so I decided to start doing some research on the value of old cards.

At this point my interest was peaked, my nostalgia was coming back to me, and I had to learn more.  That led me to YouTube channels like Alpha Investments, Vintage Magic, and Edwin the Magic Engineer.  Upon seeing some of the budget deck content that was coming out from Edwin’s channel and later the Alltingsconsidered podcast, I was inspired to build some budget mono colored decks.

I thought at the time I would be able to build the majority of those decks with the cards I already had….

Well I was wrong and many TCG orders later covering most of the month of June and July I was able to build several budget mono color decks and even a black/white deck with the scrublands I already had.  At this point I was already hooked. I went looking for as much old school magic content as I could find. One thing lead to another where I found Old School Reddit, then Old School Facebook groups, then Old School Magic Discord.

And finally, after nearly 23 years, I started playing magic again. This time online using Skype with other random and equally excited people on the internet.

A couple weeks ago I made it to the GP LA and Deep Spawners LA  event were I finally experienced my first real magic tournaments.

I had a blast that entire day

Even though I went 0-3 with a budget Merfolk deck at GP LA, I was super happy to be given my 2nd beta card.

(Studio_Headz traded me a beta island for a revised island after I expressed how much I liked my only beta card a ‘Merfolk of the Pearl Trident’).

Then later that night I played at the Deep Spawner event with a black and white deck which reminded me of the deck I used to primarily play back in middle school. I ended up winning 1 series of the 5 total.

It was a great night of meeting new people and playing magic and moving forward I am now super excited for the next event!